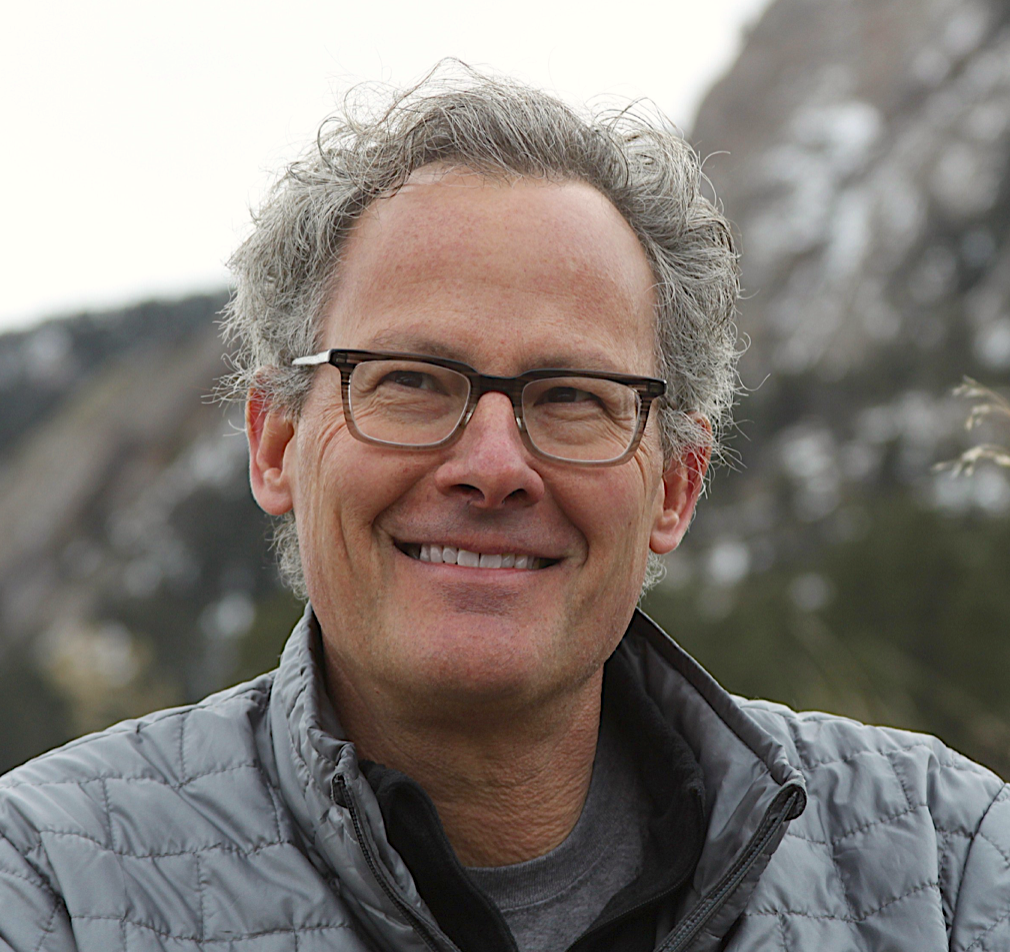 
Join his conversation via his blog:
http://www.roughtype.com/

Learn more about Nick at:
http://www.nicholasgcarr.com/

Utopia is Creepy: And Other Provocations, Carr’s fifth book, was released in September 2016. An anthology of his best-selling articles and journal entries, the book offers an alternative critique of our increasing dependence on technology.

Listen to Carr’s discussion with NPR about The Glass Cage.

Carr offers insight on how social media is redefining the norms around the U.S. Presidential election and what that might mean for the candidates in his recent article for Politico.

Carr’s The Glass Cage: How Our Computers Are Changing Us, published in 2014, was recently released in paperback. The book is at once a celebration of technology and a warning about its misuse. Even as they bring ease to our lives, Carr argues, computer programs are stealing something essential from us.

“The Glass Cage is not just a timely critique of society’s growing dependence on computers. It’s a riveting story of humankind’s entanglement with machines.” — Good Reads

“Mr. Carr’s prose is elegant, and he has an exceptional command of the facts. He serves a varied menu of the ways that technology has failed us, and in every instance he is not only persuasive but undoubtedly right.”  — Wall Street Journal

“Nick Carr is our most informed, intelligent critic of technology. Since we are going to automate everything, Carr persuades us that we should do it wisely — with mindful automation. Carr’s human-centric technological future is one you might actually want to live in.” — Kevin Kelly, author of What Technology Wants

“Nick Carr is the rare thinker who understands that technological progress is both essential and worrying. The Glass Cage is a call for technology that complements our human capabilities, rather than replacing them.” — Clay Shirky, author of Here Comes Everybody and Cognitive Surplus

Nick Carr is a compelling writer and speaker whose work focuses on the intersection of technology, economics, and culture. He is currently the Richmond Visiting Professor at Williams College in Massachusetts and was formerly the executive editor of the Harvard Business Review.

A journalist by trade, Carr is the author of several acclaimed books, including The Shallows: What the Internet Is Doing to Our Brains (2010), a Pulitzer Prize finalist and a New York Times bestseller, and The Glass Cage: Automation and Us (2014), which examines the personal, social, and business consequences of our ever-growing dependency on computers, robots, and apps. His most recent book, Utopia Is Creepy: And Other Provocations (2016), uses a collection of his seminal essays to further explore the Internet’s impact on society.

Carr is also the author of two other influential books, The Big Switch: Rewiring the World, from Edison to Google (2008), which the Financial Times calls “the best read so far about the significance of the shift to cloud computing,” and Does IT Matter?: Information Technology and the Corrosion of Competitive Advantage (2004). His books have been translated into more than twenty-five languages.

Carr has written for The Atlantic, the Wall Street Journal, the New York Times, Wired, Nature, and MIT Technology Review, among others. His essays, including “Is Google Making Us Stupid?” and “The Great Forgetting,” have been featured in several anthologies, including The Best American Science and Nature Writing, The Best Spiritual Writing, and The Best Technology Writing. In 2015, he received the Neil Postman Award for Career Achievement in Public Intellectual Activity from the Media Ecology Association.

Carr is a former member of the Encyclopedia Britannica’s editorial board of advisors, was on the steering board of the World Economic Forum’s cloud computing project, and was a writer-in-residence at the University of California at Berkeley’s journalism school. He also maintains the popular blog Rough Type.

Earlier in his career, he was a principal at a management consulting company.

Carr holds a B.A. from Dartmouth College and an M.A., in English and American Literature and Language, from Harvard University.

Computers, Automation and the Human Future

Nicholas Carr, author of such celebrated books as The Shallows and The Glass Cage, will offer a lively and provocative examination of how digital technologies are shaping our jobs, lives and society. Drawing on examples ranging from doctors’ offices to airplane cockpits to the recent presidential campaign, Carr will argue that prevailing software and systems design philosophies end up eroding skills, diminishing contextual and critical thinking, and creating a culture of distraction and dependency. He will make the case that only by shifting our assumptions about technology and its personal and social consequences will we be able to forge a future fit for human beings rather than robots.

Digging behind the headlines about artificial intelligence and self-driving cars, digitized medicine and workplace robots, Nicholas Carr explores the hidden costs of granting software dominion over our work and our leisure. In this presentation, based upon the themes in his latest book, The Glass Cage, Carr explores the impact of automation from a deeply human perspective. Mixing history and philosophy, poetry and science, the book culminates in a moving meditation on how we can use technology to expand the human experience rather than narrow it.

Drawing on the themes in his Pulitzer Prize finalist and New York Times bestselling book, Nick Carr lucidly examines the most important topic in contemporary culture – the mental and social transformation created by our electronic environment. In this presentation, Carr provides a deep, enlightening examination of how the Internet influences the brain and its neutral pathways and concludes with a very humanistic petition for balancing our human and computer interactions.

Building A Bridge to the Cloud

Over the past few years, much of the excitement – and challenge – of cloud computing has focused on building the infrastructure. But as we saw a hundred years ago with the electric grid, the biggest wave of innovation begins only after the infrastructure is stable. In this talk, Nick looks ahead to the next stage of cloud disruption, and provides practical advice on how companies can “build bridges to the cloud” for their customers.

Drawing on the themes in his bestselling books, Nick describes how the World Wide Web is turning into the World Wide Computer as data and software move into the internet “cloud.” Exploding the narrow definition of “Web 2.0,” Carr puts the shift into a broad technological, economic, and historical context, laying out the challenges and opportunities that businesses will face as they confront computing’s new age.

Noting that innovation isn’t free, Nick argues that organizations should focus their creativity on a few critical areas – the ones capable of producing a competitive edge – and be ruthless imitators elsewhere. He offers a series of pragmatic and often surprising strategies that will increase the odds that innovation initiatives and investments really pay off, illustrating them with compelling examples.

Nick draws on his celebrated book, Does IT Matter?  to examine the strategic role of IT. Can IT innovation still provide strong competitive advantage, or has it become a cost of doing business, essential but strategically inert? This presentation will challenge the assumptions and stir the thinking of technologists and business managers alike.

Utopia is Creepy: And  Other Provocations

The Glass Cage: How Our Computers Are Changing Us

The Big Switch: Rewiring the World, from Edison to Google 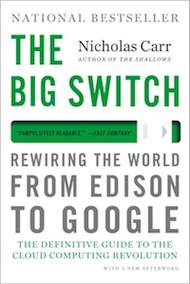 The Shallows: What the Internet is Doing to Our Brains 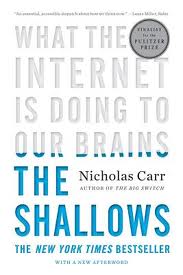 Does IT Matter? Information Technology and the Corrosion of Competitive Advantage 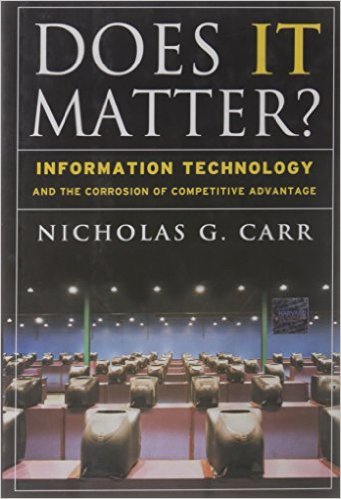 The Glass Cage: Automation and Us

Building a Bridge to the Cloud

interview about The Shallows – PBS NewsHour

Does the internet discourage deep thinking?

The Internet May Be Changing Your Brain In Ways You’ve Never Imagined, The Huffington Post, October 9, 2015