Leonard is founding director of the Program for Health Care Negotiation and Conflict Resolution at the Harvard School of Public Health (HSPH). He is also founding co-director of the National Preparedness Leadership Initiative (NPLI), a joint program of HSPH and theKennedy School of Government as well as a principal at Health Care Negotiation Associates.  Additionally, he is on the Faculty of Health Services at Ben-Gurion University of the Negev, Israel.

Leonard has played a leading national and international role in terrorism preparedness and emergency response, developing the conceptual and pragmatic basis for “connectivity” — the coordination of  people, organizations, resources, and information to best catch, contain, and control a terrorist or public health threat, and meta-leadership – overarching leadership that strategically links the work of different agencies and levels of government.

An extraordinary executive coach, he has consulted to, trained, and provided advice to leaders in of health care organizations and governmental agencies across the nation and around the world.

His research and teaching interests include national and international terrorism response strategies, the implications of conflict in health care services, the uses of mediation for resolving disputes, the contributions of conflict resolution, as well as the role that health plays in resolving larger social conflict. His talks focus on negotiation, conflict resolution and leadership.

Leonard is lead author of Renegotiating Health Care: Resolving Conflict to Build Collaboration, 1995, 2011 which received the Book Prize Award for Excellence in Alternative Dispute Resolution from the Center for Public Resources Institute.  He is also co-author of Mediating Bioethical Disputes: A Practical Guide. He has written for Newsweek, The Boston Globe, the AMNews as well as a number of scholarly journals.

His international work includes assignments in the Middle East, Eastern Europe, Latin America and the Caribbean. His work has been profiled on National Public Radio, in The Washington Post, AMA News, Health Forum, Hippocrates, CNN, Modern Healthcare, CNBC, Hospitals, and The Boston Globe. 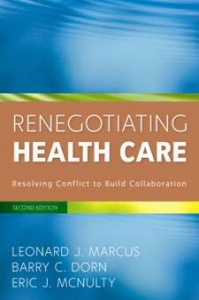